Ok, from my last blog you might have guessed that although I thought the island is pretty I really haven’t been moved by this Moai thing. Well all that has changed. Went to Rano Raraku today. Site of where they quarried all of the big heads and I am duly impressed. This was rather impressive. Prior to coming here I had a vision that there were more heads here than there are; like scattered all about the island, but this is not the case. Although this is a “small” island it is not as small as one might think; so 900+ heads scattered about still do not amount to seeing them everywhere. Furthermore, the ancients were clearly not stupid, the further they had to take the head the smaller they made them. So the first heads I saw were not all that impressive compared to other things I have seen in the world like the stuff in Egypt. Don’t get me wrong, they ain’t small and it WAS a pretty nifty feat to move these things as they did, it just wasn’t awe inspiring. And since the Europeans interrupted life here the Rapa Nui stopped taking care of the Moai and all toppled over; so what you see are those which have been restored to their standing position.

Again my ambivalent feelings changed today. This was worth the trip. The big heads closer to the quarry site were indeed impressive. I could have stood there and looked at them all day. I shot over 400 images on that site alone. This is where the most common pictures of the heads come from. I hope I’ve done them justice (below is just one quick sample).

The largest Moai ever moved weighed approximately 82 tons and was moved about 3 miles! Think about that. They had to make this thing with primitive stone tools, move it, build a base for it, then erect on said base. But the best part is there was a habit of putting Pukaws on top – that would be stone hat which weighed about 11 tons…which was fashioned from a different stone from a different location and then had to be put on top of this Moai which was about 33 ft tall. When I saw these larger Moai and did the calculation that’s when I got the HOLY COW moment. And holy cow it was.

And as much as I have written about how much vegetation there is here (ie. all the grass etc.) the more I walk this island the more I’m starting to think, this is a barren wasteland. In between what seems to be fields of grass are fist size (and larger) volcanic rocks. In most places it seems to be littered with this stuff. The grass have somehow made their way through this and flourished. There seem to be guava plants growing wild here now (I believe they were introduced in more recent times and probably it is the birds which have scattered the seeds all over the island). Everyday I fear tripping and falling this stuff because it is hard, sharp and nasty. I’m beginning to wonder how the ancients survived here. And then the ants… there are ants EVERYWHERE on this island.

Please note that at the height of ancient Rapa Nui only about 3000 men, women and children lived here and they were able to make these. And this statue? You are only looking at 1/3 of it, the rest is underground. 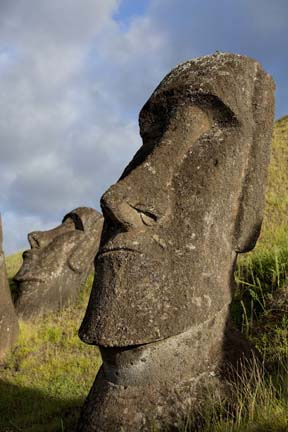 If this doesn’t give you a sense of the scale… 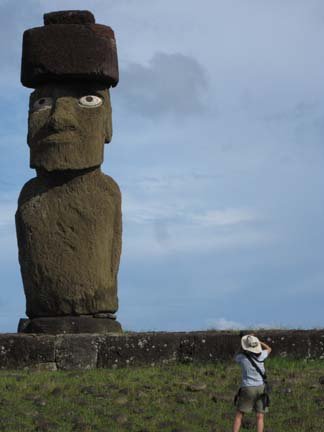