It’s day two now in Egypt and I’m tired of saying, “I’m American, really.” And then going into the whole thing about whether or not I’m “really” american. So today I decided when the question comes, “From China?” my answer is “yes”. It seemed to put and end to the discussion. And since the question only comes from people trying to sell me tourist junk, I don’t mind it putting and end to the discussion. I suppose most of them don’t speak Chinese.

And the photo below? That’s me next to an Egyptian Army sniper rifle with the Zim Air passengers on the rifle. The soldiers wouldn’t let me take photos WITH them. 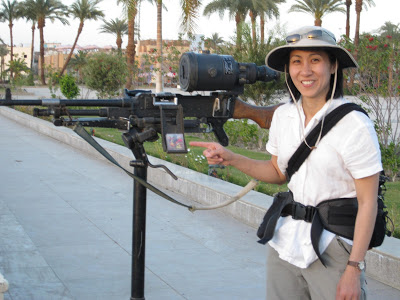 And this is one of the temples I saw today. What’s the scale? Do you see the Zim Air Luxury Transportation Vehicle there on the bottom of the first column on the right?